In late 2020, the UK Space Agency selected AstroAgency to act on behalf of industry-led group Space Scotland (formerly the Scottish Space Leadership Council) to analyse the Scottish space ecosystem and provide a set of reports and strategic recommendations to enhance the country`s space industry offering and its ability to support wider UK space sector aims.

A development grant was provided by the UK Space Agency that enabled AstroAgency to conduct industry-wide stakeholder engagement and consultation, as well as establishing connections with other UK space regions. A research phase was required to trace the beginnings of Scotland`s space activity and attempt to define the reasons behind the seemingly ad-hoc activity being carried out in the country across the value chain, from more small satellites being manufactured in Glasgow than anywhere else outside of the USA, to the development of five spaceports and two launch vehicles, through to the dynamic and downstream space data segment established in Edinburgh and other parts of the country`s central belt. AstroAgency interviewed prominent figures from the sector, both from industry and research bodies, as well as the Universities of Strathclyde, Edinburgh and Glasgow. Webinars were carried out and surveys were conducted to gain an understanding of what the sector felt was needed to turn the positive but somewhat disorganised sector growth into more of a structured success, with capability matching, gap analysis and a more strategic focus.

The project ultimately led to three reports being produced to help move the sector in Scotland to a higher level of maturity on the UKSA`s cluster development model. The reports included a step-by-step formalisation plan for the Scottish Space Leadership Council and a 70-page document created thanks to the input of over 50 stakeholders, entitled, A Plan for Space in Scotland.

The top level recommendations called for the Council to be formalised into a not-for-profit legal entity in order to allow us to harness and leverage dedicated resource in the form of full-time staff members and a more organised level of sector promotion and engagement, the move to a democratically elected Chairperson to represent the group, and the creation of Scotland`s first ever national space sector strategy.

The milestones were completed early, and, within weeks, the Scottish Space Leadership Council was formalised into a legal entity for the first time in its five years of voluntary operation, a Board was established and the first election of a Chair for the group was carried out. The new organisation is called Space Scotland and boasts membership of over 50 organisations in Scotland, as well as representation from government and academia.

In addition, since the work was completed, Scotland has gone on to launch its inaugural Space Strategy, a document created in partnership between industry, academia and government.

More about AstroAgency’s role in coordinating, designing and promoting the Scottish Space Strategy 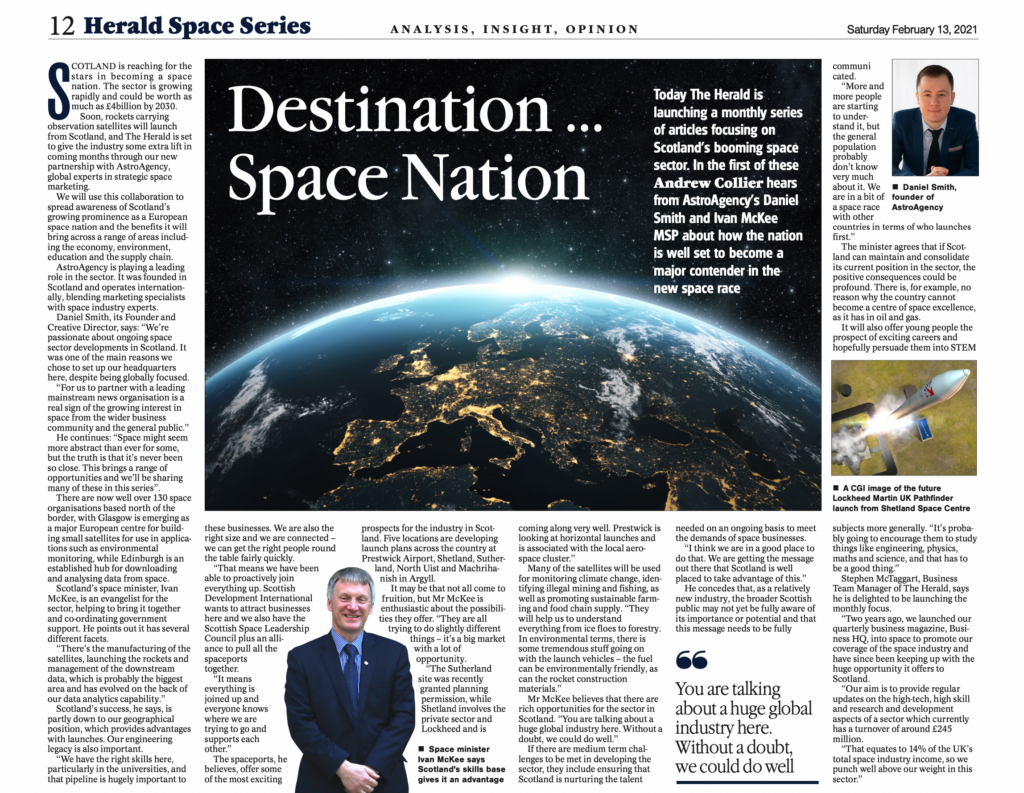